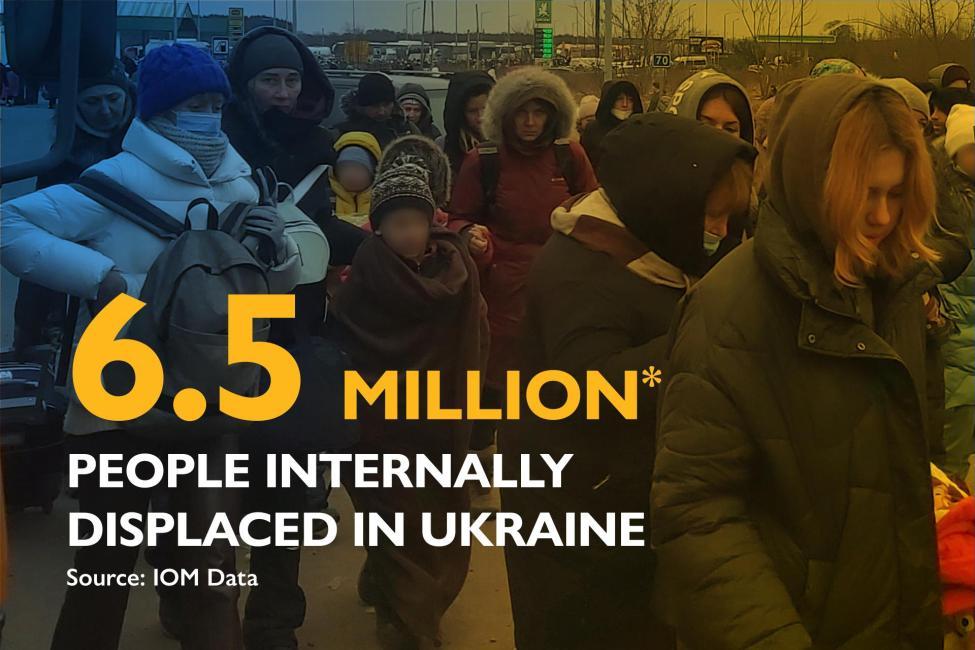 Geneva – Almost 6.48 million people are displaced in Ukraine as a direct result of the war, according to a study by the International Organization for Migration (IOM) conducted between 09 and 16 March.

IOM's data show that 13.5 per cent of those newly displaced had already had prior experience with displacement during 2014-2015.

Many of those displaced are particularly vulnerable, pregnant and breastfeeding women, elderly persons, those with disabilities, chronic illnesses and people directly affected by violence. More than 60 per cent of heads of households surveyed are accompanied by children.

Over 53 per cent of internally displaced people are women. According to the survey, the most pressing needs include medicines, health services and financial resources.

These people are among the nearly 10 million that have been forcibly displaced both in Ukraine and beyond the country’s borders in neighboring countries, among them 186,000 third-country nationals.

“Responding to the needs of those internally displaced and stranded in Ukraine is our top priority. Our teams have been reaching thousands of people with essential aid, but we need hostilities to cease in order to be able to reach people in severely affected areas.”

People displaced within the country’s borders need urgent humanitarian assistance amidst the worsening situation in Ukraine, a cessation of hostilities and the creation of humanitarian corridors to allow civilians to escape to safety.

While operational and security challenges persist, IOM continues to provide much needed aid in Ukraine and neighboring countries, whenever and wherever possible, in close coordination with humanitarian partners, distributing core relief items to displaced persons, including blankets, food, kitchen sets and hygiene kits.

To date, IOM has distributed more than 18,000 thermal blankets and 8,000 hygiene kits to newly displaced persons in collective centres in Lviv, Ivano Frankivsk, Dnipro, Mykolaiv and Zakarpattia Regions. As new humanitarian relief supplies arrive to IOM warehouses in Ukraine every day, additional distributions are being coordinated with the Ukrainian government at the municipal and oblast level and with IOM’s growing implementing partner network.

In coordination with the State Migration Service of Ukraine, IOM has also provided food and kitchenware at two shelters for displaced people in Zakarpattia region and delivered hygiene kits to four social institutions in Luhansk.

The Organization also manages regional hotlines to support the safety of individuals on the move in Ukraine. Between 24 February and 16 March, IOM Ukraine provided more than 12,000 consultations through the national toll-free migrant advice and counter-trafficking hotline (“527”).

The top three questions our teams are receiving include general information about human trafficking and safe travel, procedures to seek asylum and obtain refugee status, and possible support from diplomatic institutions and relevant organizations.

#OloiMiaKipseli: Event on the occasion of the World Refugee Day