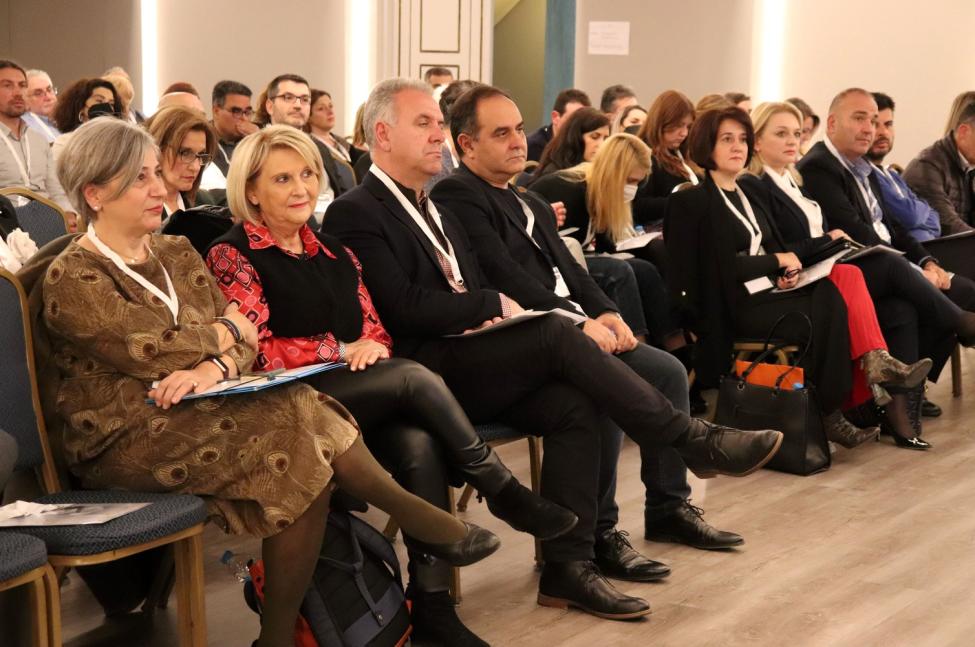 Presentation of the first research of the Cities Network on the employment of the refugee population.

In plight of the challenging times for the Greek production economy, the Cities Network for Integration supports employment growth in municipalities of Greece. The Municipality of Athens, the Municipality of Karditsa and the Development Authority of Karditsa, with the support of the International Organization of Migration (IOM), organized on December 8 and 9, 2022, a special event with the ultimate goal of facilitating the movement of labor from urban areas to the periphery.

The discussion, which took place in the presence of 16 member municipalities of the Network, began with the presentation of results of the first survey of the Cities Network for Integration on the topic "Mobility and Employment of Refugee Populations in the Greek Region" in which 41 businesses from the Regions of Thessaly, Crete and Epirus participated.  The research was financed by IOM in the context of its support to the Cities Network.

The meeting explored main challenges faced by employers in their efforts to integrate refugees into the labor market, while opportunities for collaboration between all stakeholders were identified.

As the survey finds, Greek companies are increasingly looking for workers amongst the refugee population, as labor shortages throughout Greece and especially in the Greek periphery are large and concern important sectors of the economy, such as tourism and agri-food.

"Enhancing the integration of refugees and migrants into the labor market is of crucial priority for the member municiaplities of the Cities Network and is believed to be the most effective means of social integration with a significant benefit for the domestic economy. Athens, the Municipality where the largest part of the refugee and migrant population of the country is living, constitutes a pool of labor and skills. In this context, we consider our cooperation with employers, productive bodies and other municipalities of the country for the creation of employment opportunities is very important", said the Special Advisor to the Mayor of Athens for Migrants and Refugees and the President at the City of Athens Reception and Solidarity Centre (ΚYADA), Melina Daskalaki.

The meeting was graced by the presence of the competent Deputy Minister of Migration and Asylum for Integration, Sofia Voultepsi, the Mayor of Karditsa, Vasilios Tsiakos and elected officials representatives from 16 Municipalities in total.

"I believe that the area I represent has worked positively in the direction of integration of refugees and migrants in general. Today's event is another step in a dialogue to exchange views, good practices and ideas that could help refugees and migrants join the workforce in areas of the region on a more systematic, sustainable and developmental basis. Karditsa, an agricultural region in principle needs support from workers. As it is known, agricultural employment is basically seasonal, a fact that is also witnessed in the case of many other regions of the country as well as other EU countries. I believe that through the exchange of experiences and suggestions, we can expand the effort so that the benefit is twofold: for refugees/migrants as well but also for local communities. Let’s not forget that rural areas do not only have needs exclusively related to agriculture. For example, animal husbandry, tourism, the constructions are sectors with needs on an annual basis. I appreciate that we are on the right track and that the results of a common effort between us will bear fruit", said the Mayor of Karditsa, Vasilios Tsiakos.

"The Greek economy, like many other European countries, needs a workforce in critical sectors such as tourism, agriculture, homecare. The migrants who have right of residence in Greece can help the economy and at the same time the labor market can facilitate the integration of these people into Greek society. IOM is proud to have contributed to the organization of this research by analyzing and promoting effective synergies between entrepreneurs and local authorities in response to challenges of local economies and those faced by refugees and migrants in terms of accessing available job opportunities," said the Chief of Mission of IOM Greece, Gianluca Rocco.

During the meeting, good practices from member municipalities of the Network were presented, such as the Share Sira project, implemented by the Karditsa Development Agency (AN.KA.AE.) for the integration of refugees and migrants in rural areas, and connecting tools for employers. Through a participatory workshop, specific cooperation proposals were formulated to facilitate the resettlement of refugees from urban centers to region. The proposals are to be used in the context of the Cities Network for Integration actions to draw up new initiatives.

A few words about Cities Network for Integration

The Cities Network for Integration is an inter-municipal network of Greek municipalities working together to organize and implement coordinated activities and interventions at local and national level, aimed at promoting social integration of migrants and refugees and strengthening social cohesion.  It launched its operation in January 2018, based on a memorandum of understanding between the municipalities of Athens and Thessaloniki, that paved the way for a common framework for cooperation.

The qualitative analysis research on "Mobility and Employment of Refugee Populations in the Greek Region" prepared by Dr. Apostolos Kapsalis (Panteion University) with the support of the International Organization for Migration (IOM) is the first survey in the context of the Cities Network for Integration. The study identifies the main barriers which negate or hinder the prospect of employment of refugee populations on a national, economic and social basis and suggests ways to overcome these barriers.